What happened with the gun bill last week

I’d love to say this bill is a “step in the right direction”.

I’d really like to say this bill advances our God-given right to self-defense – even in a small way.

Democrats and Republicans amended the weak, watered-down bill beyond recognition.

In all honesty, I don’t even know what some of the amendments mean for us law-abiding gun owners.

Remember, it’s NOT what the politicians say the bill does…

…it’s HOW the bill is written that matters most.

The folks who wrote this bill are lawyers.

They used legal-ese to define many important sections.

And they didn’t even record their votes on some controversial, last-minute amendments to the bill.

The bill is dangerous and it must be killed (more on that below).

The number of you watching this live debate was unprecedented.

We couldn’t keep up with the amount of folks on our live-stream who wanted their state Senator’s email address and phone numbers so you could instruct them on how to vote in real time.

During the debate on Wednesday, several state Senators said they had NEVER received this much pressure from folks back home.

They knew you were watching.

From my experience, that’s 90% of the battle.

These state politicians aren’t used to getting this much attention.

They’re not used to folks back home watching their every move on the floor.

State legislators get very uncomfortable when the barriers of protection are ripped away.

My prayer is that your engagement grows and that you will continue the pressure.

YOU forced the politicians to acknowledge that our 2nd Amendment rights need to be restored.

YOU forced the House to pass a clean, permit-less carry bill last month.

Consistent pressure is the ONLY way to get what we want from these elitist politicians.

And FAN of SC will continue to give you the tools – in real time – to keep the pressure on your state politicians.

9 Republicans teamed up with all the Democrats to kill the strong, “permit-less” carry amendment. 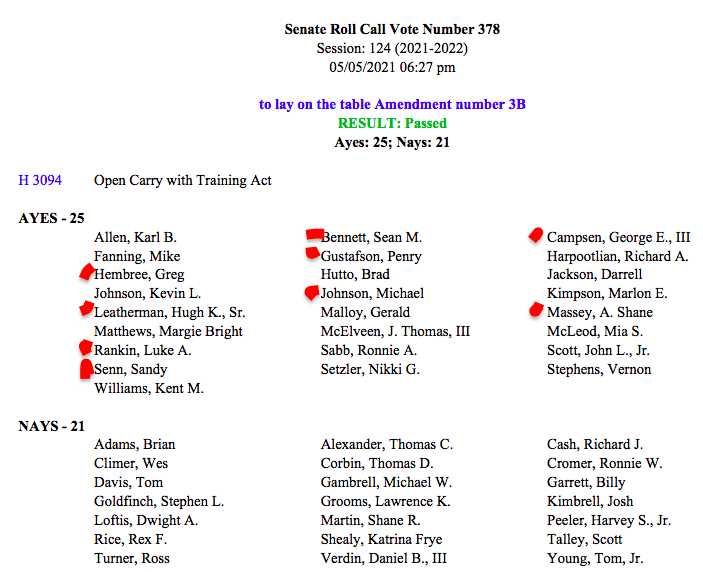 Because there was a procedural motion to “table” the bill, the AYES are the state Senators that voted to kill “permit-less” carry bill.  The red dots next to the AYE votes indicate they are Republicans.

In fact, Massey (who wants to run for Governor) stepped up to the podium to kill the strong, “permit-less” carry amendment himself.

He instructed his fellow politicians to focus more on the first 4 words of the Second Amendment (“A well regulated militia”) than the last 4 words (“shall not be infringed”).

This is an argument used by every gun-grabbing liberal that has ever wanted to pass gun control laws.

Sadly, Shane (the Republican Majority Leader) used it to lobby his colleagues in the state Senate to defeat “permit-less” carry.

But she stabbed them in the back by voting to kill the strong “permit-less” carry amendment.

Sadly, if just 3 of those 9 Republicans voted to uphold their oath to defend our Constitutional right to bear arms, the strong “permit-less” carry amendment would’ve passed.

The bill was already weak and watered-down.

But several amendments added in the last day of debate without giving citizens enough time to vet them makes this bill dangerous.

would enable state courts to send new information about you to the State Law Enforcement Division (SLED)…and eventually to the FBI (NICS).

That amendment passed unanimously on a VOICE VOTE.

The fact that your state Senator didn’t want to go on the record in support of the Democrat’s amendment should tell you all you need to know.

This process always ends up hurting us in the end.

These politicians ALWAYS have tricks up their sleeve to turn a good bill, bad.

When state legislators start adding last-minute amendments filled with legal-ese and politician-speak, it NEVER ends well for us.

The most dangerous part of this weak, watered-down bill is that it’s long and we don’t really know what’s in it.

Could the Democrat amendment (that all the Republican state Senators voice voted) be greasing the skids for an unAmerican “red flag” gun confiscation law?

Here’s what we do know:  our state legislators need to kill this weak, watered-down and potentially dangerous bill…

…and pass a clean, strong “permit-less” carry bill with NO amendments.

No more late additions that have nothing to do with the intent of the original bill.

No more amendments where you need a lawyer to translate it for us.

Start over and pass a clean bill that restores our God-given right to self-defense.

This weak, watered-down bill (open carry with permission slip) is too dangerous and needs to die a quick death.

The House will be meeting tomorrow and may discuss the changes the state Senate made to the weak, watered-down bill as early as Noon on Tuesday.

TELL YOUR STATE POLITICIANS TO KILL THE WEAK, WATERED-DOWN BILL

H.3094 was already a weak, watered-down bill to start with – the politicians still wanted you to ask permission for your God-given right.

But when they added last-minute amendments to the bill written in legal-ese and approved them on a VOICE VOTE (not recorded)...

…that was the last straw!

We don’t know your state Senators did to the bill.

Maybe they can explain the amendments to you…and why they didn’t want you to know how they voted on them.

Click here to instruct YOUR state legislators to kill the weak, watered-down bill, start over again and pass a clean “permit-less” carry bill.

As always, I gave you a pre-written email that will go directly to your employees in the Statehouse.

Your personalized, passionate message will have more impact and it is more likely your politicians will reply.

No threats or foul language.  It just needs to be clear that you want them to kill the weak, watered-down gun bill and pass a clean, strong “permit-less” carry bill.

If you need help pressuring your state politicians, please contact me immediately.