But, to quickly recap the John Hardee scandal:

While on the Commission, Hardee was also a lobbyist for Lamar Billboards - the company that received an exclusive, multi-million dollar contract with SCDOT to maintain the “blue exit signs” on SC highways

While at SCDOT, Hardee master-minded an illegal kickback scheme that funneled taxpayer money to favored political candidates, lobbyists and even himself

also while on the DOT Commission, the FBI captured (on video) Hardee accepting a ca$h bribe and conspiring to destroy evidence

Sadly, the FBI dropped the ball (no real surprise, considering their leadership in DC).

The feds say they couldn’t “prove” that he doled out specific contracts in exchange for the cash bribes...

...so he will walk away with probation (no jail time) on a felony conspiracy charge.

This is a “slap on the wrist” for one of the dirtiest, despicable, but politically well-connected bureaucrats in South Carolina.

government officials can’t use their position of power for personal profit.

and simply “accepting” cash bribes or “anything of value” as a SCDOT Commissioner is a FELONY punishable by jail time in our state.

Hardee is a dirtbag who should be behind bars!

Many of you agree.

That’s why over a thousand of you have personally emailed Alan Wilson demanding he open an investigation and start prosecuting Leatherman’s corrupt son-in-law.

Several of you took the initiative to CALL Alan Wilson and reported back to us the details of the conversation.

I must warn you: the details of these calls make Alan look weak and spineless.

However, I wanted to share these details with you so you know how to put even more pressure on Alan to his damn job and investigate scumbags like John Hardee and his father-in-law Corrupt Hugh Leatherman.

One of our biggest goals is to root out the corruption in this state...

...and there’s only one person in the state who can prosecute political criminals: the elected Attorney General Alan Wilson.

Here’s what we heard from several FAN of SC activists:

In the first call, Alan tried to blow off the citizen’s concerns.

Wilson told him the feds already did what they could.

The Attorney General hemmed, hawed and gave excuses (I’ll get to that in a second) on why he can’t prosecute Hardee under state laws.

In a separate call on Wednesday, a female FAN of SC activist in Greenville said Alan was combative and defensive.

When she asked if investigating guys like Hardee was part of his job description...

...Alan responded harshly that he is “doing his job” and will continue to do so “as he sees fit.”

And again, he came up with excuses.

After leaving a voicemail earlier in the day, one activist in Greenville received a call back from Alan on Wednesday afternoon.

The longtime conservative activist said the Attorney General was whiny, combative and even aggressively intimidating him.

Also, he dropped more excuses as to why he can’t prosecute Hardee.

Finally, by the end of the day on Wednesday, it appeared Alan had calmed down.

He stated to this individual that he was “eager” to investigate Hardee.

I guess after several calls, Wilson got the message that we’re not backing down.

A Horry County resident heard back from the Attorney General after leaving a voice mail earlier in the day on Thursday, and, unfortunately, he went back to his “excuse” play book.

The two excuses Alan Wilson used in all of the phone conversations he had with FAN of SC activists were...

#1: His hands are tied until the end of the FBI investigation of John Hardee.

#2: He doesn’t have enough resources at the AG’s office to go after Hardee.

Let’s be clear: both of these excuses are lame.

Whatever you want to call it, they’re bad excuses.

First, the federal investigation is OVER.

John Hardee has agreed to plead guilty in federal court for a felony charge of destroying evidence.

The feds are recommending 10-16 months of probation.

The investigation is done.

The US Attorney made that clear in her memo to the media a few weeks ago.

Second, Alan has plenty of resources – time and money - to investigate corruption in the Statehouse.

His office gets million$ of tax dollars every year to employ attorneys that prosecute criminals like John Hardee.

He can utilize the State Law Enforcement Division (SLED) to help with an investigation into John Hardee.

Now...as far as how Alan prioritizes his time...

...well, here’s what Alan has been doing over the last few months INSTEAD of investigating criminals like John Hardee: 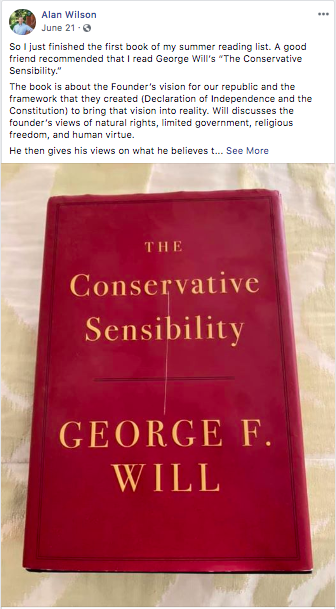 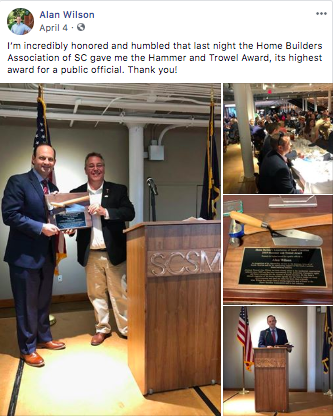 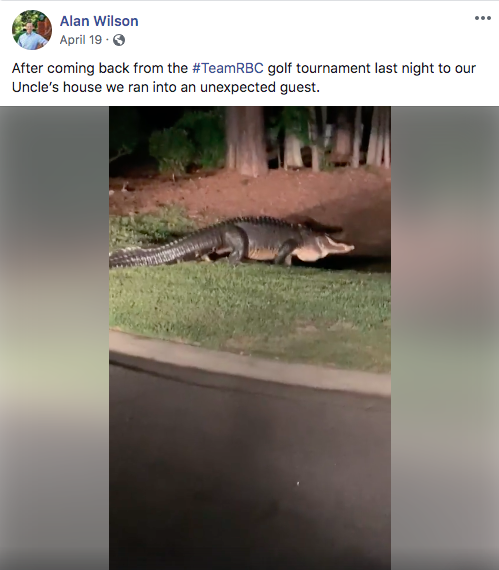 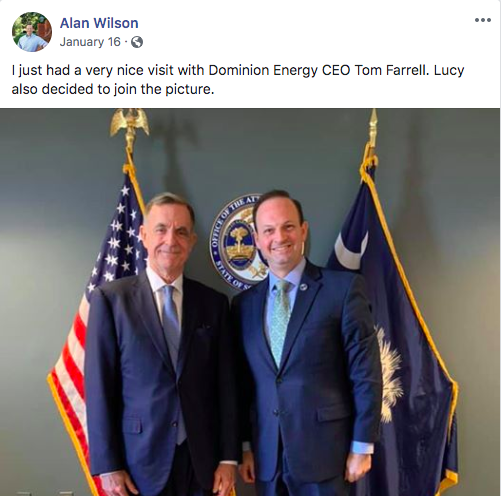 This is why corrupt politicians like John Hardee never go to prison.

It’s NOT because the feds are still investigating.

It’s NOT because Alan Wilson doesn’t have the time and resources.

(He has plenty of time to watch golf, meet with power company CEOs, hang out with lobbyists and read books by Never Trumpers.)

It’s because Alan Wilson is ONE OF THEM.

He’s one of the political elites in this state...

...and he’s afraid to go after the biggest criminal of them all – the most powerful politician in the state: Corrupt Hugh Leatherman.

Alan would rather climb the political ladder than be a tough-on-crime prosecutor.

If you’re like me, and want to see these corrupt dirtbags prosecuted to the fullest extent, we only have one option...

...we have to turn up the pressure and force Alan Wilson to investigate corruption in the Statehouse.

He won’t do it without pressure from you and me.

He’s either unwilling or too afraid.

We have to force him to prosecute corrupt politicians.

WHAT YOU CAN DO RIGHT NOW

He used his office at SCDOT for personal profit.

Tell Alan NOT TO DROP THE BALL on John Hardee...

...start, AND FINISH, an investigation.

Tell him to put down the lobbyist awards, golf tournament tickets, Never-Trumper books and prosecute Hardee!

It’s time to bring these corrupt politicians and bureaucrats to justice!

We’re also trying to build up Twitter followers too.

Corruption is the single biggest problem we have in South Carolina.

It’s why our roads are still crumbling, our school system is dead last and our monthly electricity bills are the highest in the country.

And it’s a great way to stay in touch.

If you need help sending a message to your state politicians, don’t hesitate to call me!