Has your county declared a "state of emergency"?

Last week, between making sure my kids did their school work and grocery shopping, I saw on the TV that my Mayor had declared a “state of emergency”.

It went in one ear and out the other.

With all the turmoil going on, I didn’t really pay much attention what the Mayor of Mount Pleasant had declared.

I didn’t think it mattered.

When I hear about a local politician declaring a “state of emergency” two things come to mind:

2. It’s part of the “official” process to become eligible for help from the federal government...like when a hurricane strikes the state or county

But a few days later, I read about how a “state of emergency” passed by politicians in Saluda County could infringe on our 2nd Amendment rights.

That caught my attention.

Regardless of what your opinions may be on this Chinese coronavirus...

...to shut down our economy for months at a time...

(Personally, I’m with the President: the cure can’t be worse than the problem.)

But whatever your opinions...we can all agree that the politicians cannot – under ANY emergency – trample on our God-given rights.

So I started to look into it.

I Googled “South Carolina” and “state of emergency”.

I found that many SC counties and cities have made some sort of emergency declaration related to this Chinese coronavirus.

Then I started looking into the “Code of Laws” in some of the counties and towns that declared emergency orders.

What kind of “emergency” powers do these politicians assume when they make these declarations?

What I found was NOT good.

Take a look at my town of Mount Pleasant...

Mayor Will Haynie proclaimed a “state of emergency” on March 16th.

Here’s what that could mean, according to the town code of laws (Chapter 41-03): 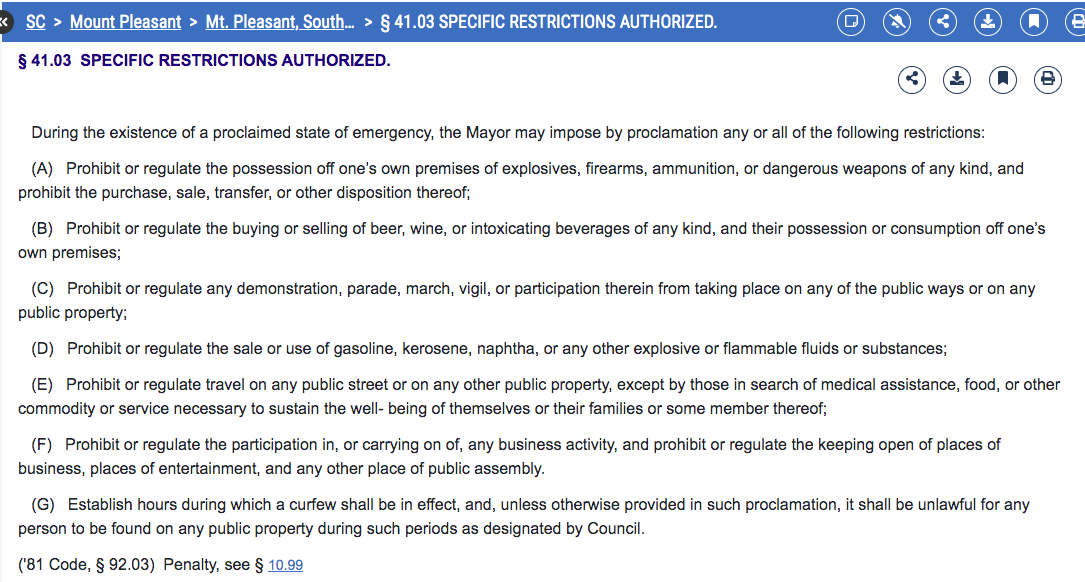 The first restriction he can impose?

“Prohibit or regulate the possession off one’s own premises of explosives, firearms, ammunition, or dangerous weapons of any kind, and prohibit the purchase, sale, transfer, or other disposition thereof”

Under this “state of emergency” I couldn’t properly defend myself and my family if I left my property to go grocery shopping...

...a clear violation of my Second Amendment rights.

Also – what is the definition of “dangerous weapons”?

My wife carries a stun gun for self-defense.  Would that be considered “dangerous”?

How about subsection C?

“Prohibit or regulate any demonstration, parade, march, vigil, or participation therein from taking place on any of the public ways or on any public property”

This is a violation of my First Amendment right to free speech.

If the Town Council met to vote on a controversial proposal during this “state of emergency”, they could block me and my neighbors from publicly protesting their actions.

And take a look at subsection G...

“Establish hours during which a curfew shall be in effect, and, unless otherwise provided in such proclamation, it shall be unlawful for any person to be found on any public property during such periods as designated by Council.”

A curfew?  With no limitations on time?

Also a violation of my Constitutional rights.

This seems like an extraordinary amount of unconstitutional power in one person’s hands.

And it’s not just the Town of Mount Pleasant...

“Suspend or limit the sale, dispensing or transportation of alcoholic beverages, firearms, explosives and combustibles”

Limiting the sale of firearms?  Suspending the right to travel with our guns?

Again, a clear trampling of our right to defend ourselves and our family.

Richland County politicians also have the power to take away your free speech rights under subsection 11 of their emergency declaration.

The Mayor of Columbia Crazy Steve Benjamin declared a “state of emergency” on March 16th.

Thankfully, y’all forced Attorney General Alan Wilson to do his job and he finally sued the city of Columbia for their unconstitutional, illegal law.

Under Article II Section 7-35, the city makes it illegal to defend yourself if you need to leave your house.

The “emergency declaration” also makes it almost impossible to leave the city of Columbia, as this section also makes it illegal to sell gasoline. 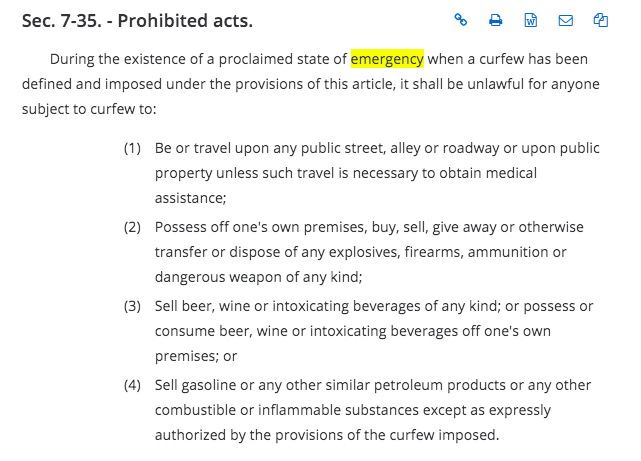 All of these provisions are triggered by the Mayor implementing a curfew...

For most citizens of Columbia, traveling between the hours of 11pm and 6am is now illegal.

What evidence does the Mayor have that the Chinese coronavirus travels better at night?

The Mayor of Greenville Knox White (another gun control proponent) also implemented a curfew after declaring a “state of emergency”.

These curfews have nothing to do with containing a virus.

It has everything to do with power and control.

To be fair, not ALL of these local politicians who have made “state of emergency” declarations intend to trample on our rights.

Horry County’s code of laws doesn’t have any restrictions on our gun rights under a “state of emergency”.

And just this week, the Greenville County Sheriff Hobart Lewis stated that he doesn’t plan on strictly enforcing Governor McMaster’s executive order limiting all public gatherings to 3 or less people.

Many of these politicians may not intend to restrict our rights...

...they should never have these powers in the first place.

Restricting our God-given rights to free speech and self-defense should never be an option for any politician.

It’s times like these that our politicians should doing everything in their power to protect our Constitutional rights.

These “state of emergency” laws need to be repealed.

We need to make sure that we have control of our government – even during times of national crisis.

We need to make sure our rights are protected – especially during an “emergency”.

“Have you declared a ‘state of emergency’?”

“Are there unconstitutional/unAmerican provisions in those declarations?”

If there are parts of the county law that trample on your God-given rights, demand they repeal those laws as soon as possible.

If there are “emergency” provisions that restrict your right to protect you and your family, they need to be repealed.

Please send us their responses – especially if your local politicians reply with arrogant or indignant retorts. 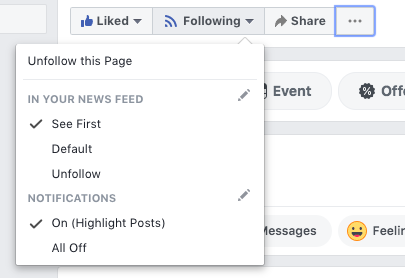 We’re going to be following this very closely and will be tracking responses from your local politicians.

If you have trouble getting a hold of your politicians, please call me immediately.