A new report shows how Pickens County state legislators appoint and control powerful bureaucrats that are responsible for:

Currently, there is an opening on the Pickens County Board of Elections, and the deadline to apply was yesterday (August 31).

The candidates for this powerful position should be appointed at a public meeting in Pickens County so we can vet them and hold our legislators accountable for their job performance.

Sadly, Pickens County state legislators refuse to do that.

Two years ago, there was a previous opening on the Pickens Board of Elections.

Rather than hold open public meetings, state Senator Rex Rice (Chairman of the Legislative Delegation) admitted they made the appointment OVER EMAIL.

A far-left liberal activist was appointed to the Pickens County Board of Elections.

After last year’s election, many people had reasonable questions to ask about the integrity of election processes.

How did the far-left Board of Elections member respond?

By telling conservatives to “shut up” on Facebook (see picture below). 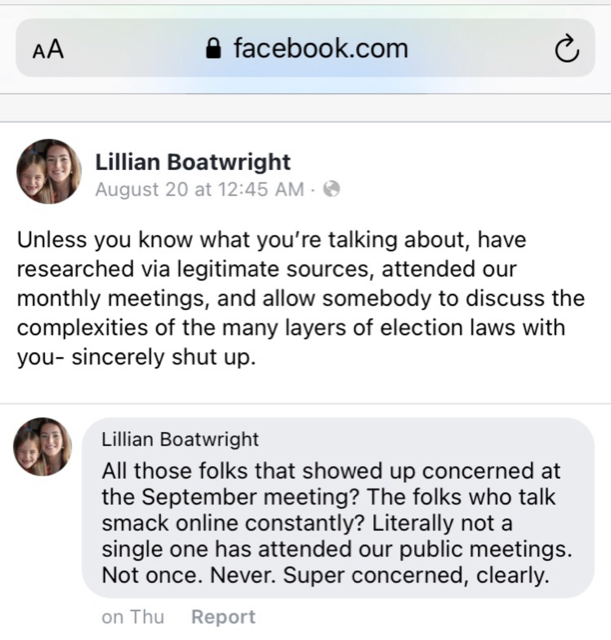 …not condescending elitists who were appointed in secret.

But make no mistake – if your state legislators are able to make this appointment over private emails, you could easily end up with another far-left activist on the Board of Elections.

Your state Senator Thomas Alexander needs to hear from you today.

This appointment could be made at any time.

Call and/or text them with a simple message:

“The appointment to the Board of Elections – and ALL other appointments – needs to be made at a public meeting in Pickens that I can attend and vet all of the applicants. No more appointments made in secret!”

*Want to know more about Thomas Alexander’s voting record, who funds their campaigns, and how they make a living? Click here.