In March, back when the Chinese coronavirus frenzy was at a fever pitch, our state legislators called an emergency session in Columbia.

They rushed to the Statehouse and passed an “emergency” bill to “fight the virus”.

This week, we found out what actually happened to that money.

In a report from investigative journal The Nerve, less than 10% has even been spent from that “emergency” bill.

Some kind of “emergency”, huh?

Investigators at The Nerve found that “emergency” money was getting sent to marketing firms and TV stations. 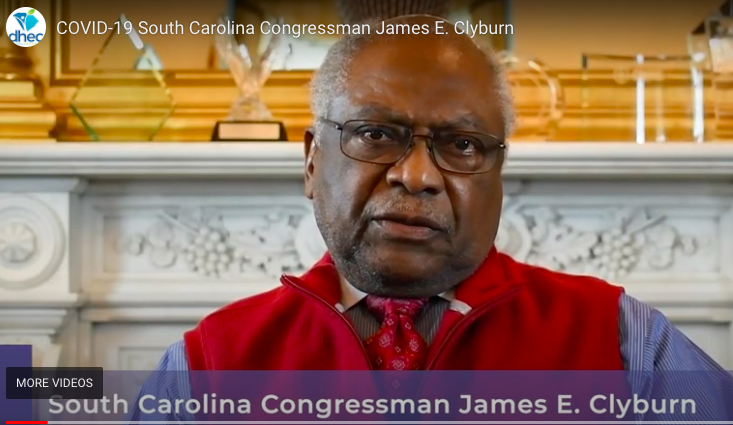 Thanks to our state legislators, Clyburn is getting free re-election advertising on our dime.

Another questionable expenditure out of the “emergency” fund...

...$108,000 to a cleaning company that employs state representative Chip Huggins.

Chip is the director of “business development” for RNR, Inc – commonly known as “Duraclean Professional Services”.

I don’t know about you, but when I hear that a state legislator is the director of “business development” for a company, it can only mean one thing...

...he was hired to use his political connections to get more government contracts.

And don’t forget, state Rep. Huggins is no stranger to outrageous government spending and pet projects.

Last year he convinced his leaders in Columbiato include a $1.5 million earmark for walking trails into the state budget.

Was Chip’s cleaning company the only company who could do the job?

Was his company the best option and the lowest bid?

But it doesn’t smell right.

And it’s the result of politicians going unchecked.

We have to double-down and put even more pressure on them this summer.

We can’t sit back and relax.

Legislators are planning multiple “special sessions” over the next few months.

The threat of dangerous bills passing is still high.

Researchers at the South Carolina Policy Council have identified these threats in their last article.

Here are just a few bills that could be snuck through by legislators in the Statehouse during an “emergency” session:

If passed, any town or city that currently doesn’t levy a property tax would be given the authority to jack up your taxes.

The state Senate already passed S.227 earlier in the year. And House leaders were on the verge of passing it before the Chinese coronavirus shutdown.

This is nothing more than a bailout from state legislators to cities who can’t control their spending.

If you live in a city or town without a property tax, you could be paying more next year...

...all thanks to your state legislators passing this terrible bill.

If passed, this would allow legislators to borrow even more money on our backs to provide “incentives” for huge, out-of-state corporations.

As you know, state politicians have given billions of our tax dollars and land to companies in the hopes that they will create jobs.

The most recent example?

Legislators and the Governor giving tax breaks and building a brand-new road for the liberal billionaire owner of the NFL Panthers.

But this is nothing new.

Our state politicians have piled on debt to give Chinese-owned Volvo cash, land and tax breaks since 2015.

At last count, legislators have forked over quarter of a billion (with a “b”) taxpayer dollars to the Communist carmaker!

Has your family benefitted from all that corporate welfare?

This is one of those terrible bills that never dies.

Legislators want to collect our personal, private information and put it into one centralized location.

Of course, legislators didn’t put any privacy protections into this bill.

Foreign hackers could access our most personal information...just like when they broke into the SCDOR database in 2012!

The worst part about this creepy “data warehouse”?

Powerful legislators want use it to track our children and grandchildren through school and possibly beyond.

So they can determine what careers our kids can – and CAN’T – have.

This is something straight out of Communist China or the old Soviet Union.

Politicians and unelected bureaucrats tracking and controlling our kids...

...pre-determining what kind of jobs they can have...

...and giving away intimate details about our kids to researchers and corporations.

But there is good news.

Thanks to your pressure, we’ve stopped this bill every time they’ve tried to make it law.

And this year, we’ve been empowering even more folks across the state who live in districts where their state representative voted for this creepy “data warehouse”.

We’ve mailed flyers to South Carolinians letting them know how their politicians voted and more importantly, how they can pressure them to stop it!

Here’s one flier we mailed to residents in Pickens County. 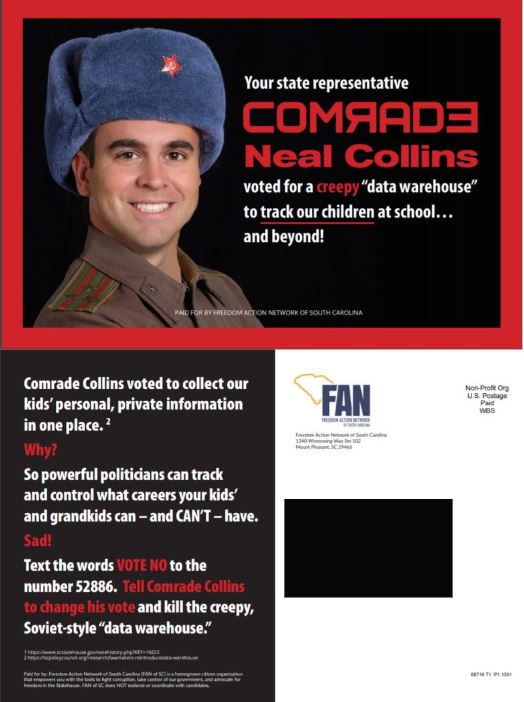 State Representative Neal Collins is a co-sponsor of the creepy “data warehouse” and thinks it’s a great idea to track and collect our kids private information.

Here’s another one we mailed to residents in Horry County. 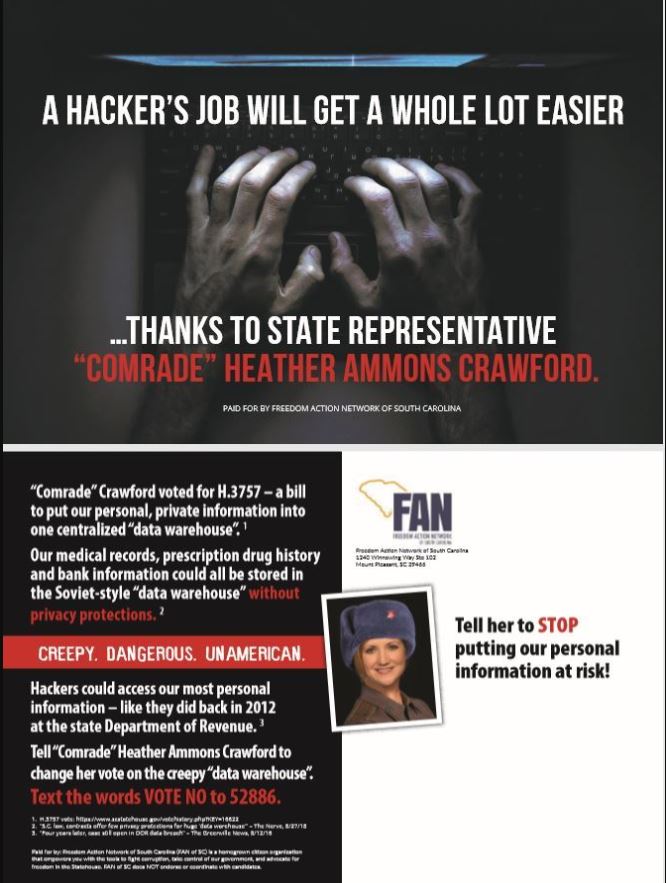 State Rep. Crawford – and other House members in both parties who voted for the “data warehouse” – could make hackers’ job a whole lot easier by putting our personal, private information all in one place.

However, in order to stop these terrible bills and “emergency” corruption, the pressure needs to be ratcheted up.

We also need to demand that our legislators kill ALL of these bad bills.

Click here to demand that your state Senator and the Governor KILL this proposal for good.

Tell your state Senator and the Governor they need to PROTECT our privacy rights, not VIOLATE them.

Tell them our family’s personal, private information is off limits and none of their business.

If you click on the links above, we have given you a template email to send to your state politicians.

However, we strongly encourage you to personalize it.  The creepy “data warehouse” needs to be killed, but so does the property tax bill and the debt for out-of-state corporations.

2. Donate to FAN of SC so we can empower more South Carolinians!

Even a few dollars can make a huge difference.

We don’t get any government money.

We don’t get any money from lobbyists.

We depend on South Carolinians like you to fund our work.

Thanks to previous donations, we were able to afford the postage on those “data warehouse” flyers to thousands of folks.

We want to empower more South Carolinians to hold their politicians accountable, but it isn’t cheap.

Can you help us?

Feel free to contact me if you need help holding your state politicians accountable.

PS – I hate asking for money and try not to do it that often.

But we’re competing against the politicians and the lobbyists who have deep pockets.

They would love to see us sit down and shut up.

The politicians desperately want to raise property taxes in our cities and towns.

If we don’t stand up to them, nobody will.

Thanks in advance for even considering a small donation!