Here's How the Legislative Session Ended...

Their agenda is very different from our agenda...

...and that was evident as the 2019 regular legislative session ended last week in the Statehouse.

(They’re still coming back to Columbia to vote on the budget on Monday...more on that in a minute.)

The bills our state legislators ADVANCED and PASSED this year shows how corrupt, how liberal, and how out of touch they really are.

Even more disturbing are the bills they REFUSED to pass...

...bills to protect the right to life...

...bills that would restore our 2nd Amendment rights...

...and bills that would protect our property rights.

Here are 5 short stories that accurately illustrate this year’s legislative session – and the priorities of our state legislators:

1. Tax giveaway to the Liberal billionaire

Our roads are crumbling.

Our school system is the worst in the country.

Our electricity bills continue to skyrocket.

Our Constitutional rights aren’t being restored.

But what was the top priority for Gov. Henry McMaster and legislative leaders like Gas Tax Gary Simrill?

Giving the liberal billionaire owner of the NFL Panthers a $120 million tax break so he would build a “practice field” for his team in South Carolina.

This is the same liberal billionaire that bad-mouths President Trump and says his players that kneel for the National Anthem are “patriotic”...

He didn’t promise to create a single new job for South Carolinians.

But that didn’t stop our state legislators from shamelessly kissing his ring.

In fact, they changed the economic development laws just for the liberal billionaire to qualify for more taxpayer handouts...

...handouts like a $40 million road that will lead to his new “practice field”.

You read that right.

While we’re paying higher taxes at the pump (thanks to the legislature) and our existing roads are still crumbling...

...McMaster and the legislature are going to build the liberal billionaire owner of the NFL Panthers a brand-new road – on our backs!

The House passed this taxpayer giveaway 90-25.

Click HERE to see how your state legislators voted.

I don’t know about you, but every election my mailbox is stuffed with postcards from state politicians who campaign as “pro-life”.

They say they believe life begins at conception and will pass legislation to protect life.

Our Republican majorities in both the state House and Senate tell us they’re going to stop abortion in our state.

The Republican leadership in the House even tried to sneak subsidies for Planned Parenthood in the state budget.

Thankfully, state Rep. Jonathon Hill and others shamed the leadership into taking it out.

Another year has passed, and another 5,000 babies will die because our legislators refuse to pass Personhood – a bill that would effectively end abortion in South Carolina.

Through modern science, God has shown us that life begins at conception.

Instead of honoring God’s gift, politicians in the statehouse want to take it upon themselves to determine when life begins.

Republicans in the House ignored the Personhood bill – effectively killing it.

Instead, they introduced a bill that would define life beginning at 6 weeks.

But then they watered it down again to include “exceptions”.

The House leadership passed the watered-down bill only after it was too late to sign it into law this year.

It’s clear protecting life is NOT a priority for our state legislators.

Click HERE to demand your state legislators pass Personhood as soon as possible.

In 2018, powerful state legislators buried a provision in the state budget that would enable politicians collect our personal, private information without our permission.

It would also be a tool for legislators to track our kids in school and determine what careers they can and can’t have.

It’s the same way Communist countries would track children and place them into the “workforce pipeline.”

But thanks to your pressure on the Governor and our state legislators, they were forced to kill it.

Sadly, they brought the creepy “data warehouse” back again this year – this time as a bill sponsored by the powerful Speaker of the House Liberal Jay Lucas.

One of the sponsors, state Rep. Neal Collins, compared it to the movie “Moneyball”...

...a story about how Major League Baseball owners use “data” and statistics to choose players.

Think about that for a second...

...these politicians view themselves as the “owners” and our kids are the “players”.

They think they can decide their futures.

These state legislators want to determine what kind of job they will have.

On top of that, they will have access to our medical records, tax history and even our drug prescriptions.

The politicians can sell or give it to out-of-state corporations without our permission.

The state Senate can take it up as early as January.

Click HERE to see how your House represented voted.

Click HERE to tell your politicians to vote against the creepy “data warehouse”.

4. Tuition breaks for Illegals, but they won’t restore our 2nd Amendment rights

Progressive Peter McCoy is the Chairman of the House Judiciary Committee.

Speaker of the House Liberal Jay Lucas hand-picked him for that powerful position at the beginning of the year.

He’s the politician who helped his wife become a judge and voted for his dad to the Board of Trustees at the Citadel.

Thousands of you across the state pressured your politicians to pass H.3456 – a bill to restore our Constitutional gun rights.

If H.3456 became law, South Carolina would be one of the freest states in the country when it comes to our gun rights.

But Progressive Peter McCoy refused to even give the bill a public hearing.

He blocked it in his subcommittee.

But you know what bill he supported and advanced out of his subcommittee?

A proposal to give illegal immigrants in-state college tuition and make them eligible for lottery scholarships.

Progressive Peter McCoy and other RINOs in the legislature voted to help illegal immigrants...

...but they didn’t restore gun rights to law-abiding South Carolinians.

...but blocked a bill to give us our Constitutional rights back.

In 2017, when our state legislature passed the largest gas tax hike in history, they promised to fix our roads.

They said if we gave them more of our money, they would repair and replace our dangerous bridges.

Our roads are still crumbling.

The politicians have only spent 25% of it.

We know they’re trying to funnel our gas tax $$$ to pet projects like I-73 and the “parkway” with bicycle lanes on I-526 in Charleston.

But all of that new money isn’t enough for our legislators.

They snuck a proposal in this year’s state budget to build toll booths on Interstate 95...

...and they introduced a bill to turn ANY road they choose into a toll road.

They want to turn South Carolina into New Jersey.

They want to make I-95 the New Jersey Turnpike.

In case you’ve never driven up north, the roads aren’t any better up there – despite the fact that tolls are everywhere.

And who is the biggest supporter of new tolls?

The same one who pushed the gas tax hike.

The same politician who makes MILLIONS off of SCDOT contracts.

Sadly, many of your state Senators voted to potentially give Corrupt Hugh Leatherman even more of our money.

The New Jersey-style toll proposal passed in the Senate version of the state budget 38-6.

See below to see how your state Senator voted. 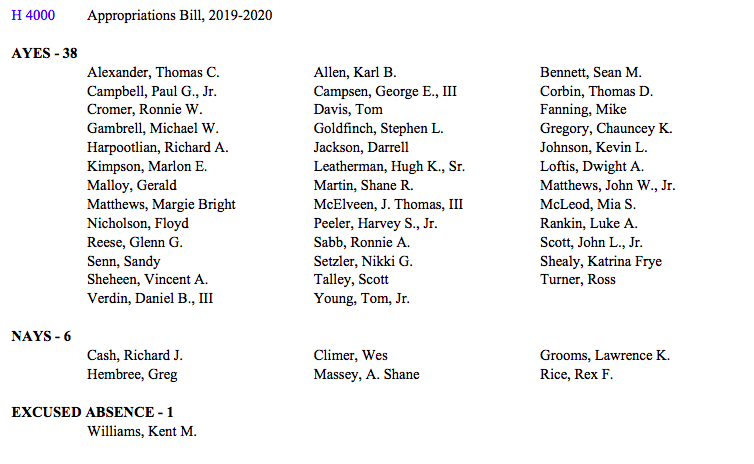 We can try to end this year’s legislative session on a positive note...we can stop the New Jersey toll booth plan.

State legislators are coming back to Columbia tomorrow to vote on the budget.

Click HERE to tell your state politicians to kill ALL plans to turn our state into New Jersey by building tolls on our roads.

Demand they use the money we’re already sending them to fix our roads!

Secondly, can you help us grow our movement?

FAN of SC is a small non-profit.  We don’t get a penny of government funds.  We’re not a big national organization.

We rely on folks like you to help us empower other South Carolinians to take control of our state government.

In fact, becoming a monthly donor will give us the resources to go on offense against these corrupt politicians like Corrupt Hugh Leatherman.

$10, $25 or even $100 each month gives us the ability to advertise on conservative talk radio and social media.

If you need help calling out your state legislators, contact me immediately.

PS – I hate asking for money, but we can’t keep track of Columbia without your resources.  If you like the updates and use our calls to action, I’d ask that you pay it forward and help us help others.