Legislators Who Think We Work For Them - In Their Own Words

In case you haven’t noticed, many politicians in our state have forgotten THEY work for US.

They don’t care about us.

And they’re rude to us.

These legislators truly believe they are in a class above us.

Especially the ones who’ve been there way too long.

Last week gave you an update on exactly how our state politicians were spending our gas tax dollars.

I told you about a scheme that would ultimately lead to our gas tax dollars getting funneled to the biggest pet project in the state: Interstate 73 on the coast.

While it appears that this bill (H.4745) is simply about how local politicians can spend “hospitality tax” funds...

...the real goal of H.4745 is diverting our gas tax $$$ to Corrupt Hugh Leatherman’s slush fund - aka the State Infrastructure Bank (SIB).

The scam bill got a subcommittee hearing in the House the week before last and got a favorable reaction from legislators.

It’s no secret that legislators want to use that local “hospitality tax” money as way to get “matching funds” from the SIB to finance their $6 billion pet project.

Politicians like Corrupt Hugh Leatherman and their buddies will get rich if more gas tax dollars get spent on I-73.

Leatherman’s real estate business partner has already made $2.8 million buying up land for this pet project, even though not a drop of concrete has even been poured!

But after getting the word out on this money laundering scheme, you threw down hard.

In just the last few days, thousands of you – 2,567 to be exact – demanded your employees in the Statehouse do whatever it takes to kill this scam bill.

Your emails were simple and direct.

The instructions to your legislators and the Governor were clear and concise...

...”do whatever it takes to KILL THIS SCAM BILL”.

Shortly after taking action, some FAN of SC activists forwarded me replies from their legislators. 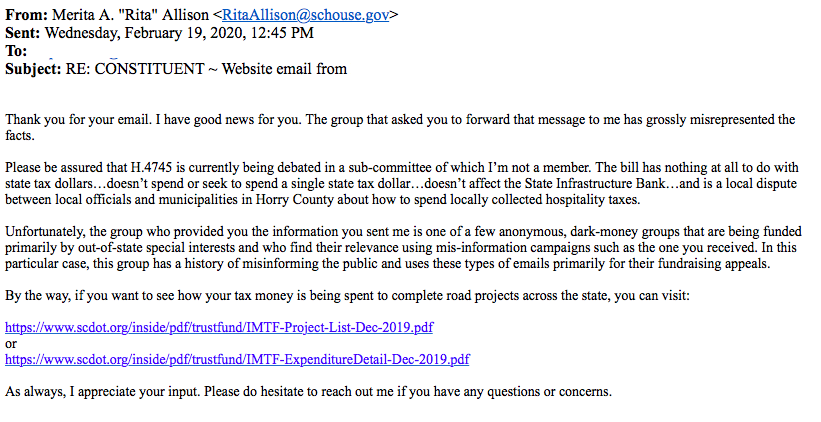 Notice how Rita NEVER bothered to address her employer’s demand...

...she didn’t say how she was going to vote.  She didn’t say she would agree to kill the bill or fight to keep it alive.

Instead, she arrogantly assumes that this individual was just “forwarding” a message from some “group”.

Her assumption is that you can’t think for yourself.

She thinks you’re just some mindless middle-man, repeating something somebody else said and you don’t actually understand or care about the issue at hand.

I guess that is what happens when you've been in Columbia for over a decade...

You’ve got to love how she throws in some internet links to SCDOT’s website near the end of the reply...

...as if that will somehow show folks that she’s not wasting our money.

According to her, we’re a “dark-money group” (whatever that means) funded by “out-of-state special interests”.

We don’t get money from out-of-state special interests.

I looked up her most recent campaign report.

All of her money came from PACs.

Half of them were huge, out-of-state corporations armed with lobbyists in the Statehouse.

One of her biggest campaign contributors?

...and she just copy and pasted the text.

There’s a good reason for that suspicion.

Here’s another one you sent to us from state representative Garry Smith (Greenville).

This will be Garry’s 17th year in the Statehouse.

He’s worked his way up to become Chairman of the Operations and Management committee...

...the committee in charge of making sure the Statehouse grounds are mowed and the candy dishes are filled at all times.

After getting disgraced former Speaker of the House Convicted Criminal Bobby Harrell’s permission, Garry spent $2 million in taxpayer funds to buy brand-new furniture for the politicians and their staffers...

...and sold the old, “dangerous” furniture back to us!

The furniture was too “dangerous” for the politicians, but Garry thought it was A-OK for the public.

I’ve met Garry a few times.  And he seems like a nice enough guy.

But this is embarrassing.

Are these politicians that lazy?

Do they really think we’re that stupid not to notice this word-for-word response?

Are the consultants they pay big bucks to write this junk so tone-deaf that they thought these fake news email responses were a good idea?

The least these politicians (our employees) can do is respond to us individually.

I mean, they do still work for us.

He should be ashamed of himself.

Again – Garry’s employers gave him a simple instruction...do whatever you can to kill H.4745.

His “auto-response” ignored the instruction and, instead, attacked us.

A few weeks back, you might remember I wrote to you about a bill going through the Statehouse called the creepy “data warehouse.”

This bill would allow state politicians to collect our personal, private information into one area and also track our kids through school and beyond.

The goal of this creepy “data warehouse”?

So politicians, bureaucrats and lobbyists can determine what careers our kids can and CAN’T have.

You killed this bill a couple years ago when powerful legislators tried to bury it and sneak it in the state budget.

But Speaker of the House Liberal Jay Lucas brought it back last year and jammed it through the House.

A couple of weeks ago, the creepy “data warehouse” bill started to make its way through the state Senate.

Over a thousand of you contacted your state Senators and demanded they kill the bill.

You also re-contacted your House members to hold them accountable for voting for it AND telling them to vote against it if the creepy “data warehouse” gets passed out of the Senate.

(If the Senate makes any changes to the House version of the creepy “data warehouse”, the House would have to vote on those changes).

Some of you forwarded me responses from your state reps after sending them VERY CLEAR INSTRUCTIONS.

All of the replies had a common theme: they all talked down to us.

They all didn’t give a rip about our instructions to them. 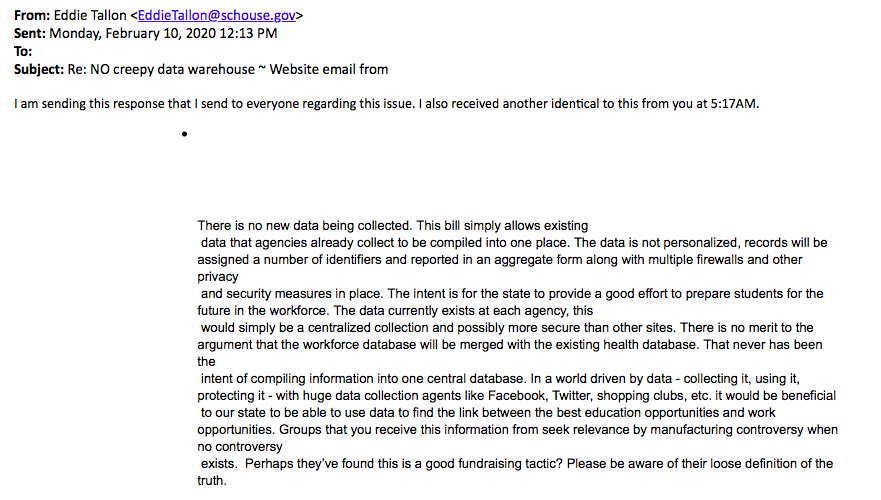 Eddie is best known for whipping votes in the House to pass the gas tax hike.

And while SCDOT sits on nearly $500 million in their bank account, Walnut Grove Road – one of the most dangerous bridges in the state – remains untouched in his district.

Eddie is coming up on a decade of experience in the Statehouse.

The first thing I noticed was the disrespectful tone:

“I am sending this response that I send to everyone regarding this issue.”

Way to really personalizing your response.

It really sounds like you don’t much care about your employer’s directives.

The second thing I noticed was how incoherent and confusing his response was.

Eddie states: “The data is not personalized, records will be assigned a number of identifiers and reported in an aggregate form along with multiple firewalls and other privacy and security measures in place. The intent is for the state to provide a good effort to prepare students for the future in the workforce.”

So if the “data is not personalized”...

...how can the “state” “prepare students for the future in the workforce”?

Seems like if you want to “prepare” students, you’d need their personal information.

Here’s another doozy from Eddie’s response:

“The data currently exists at each agency, this would simply be a centralized collection and possibly more secure than other sites.”

Does that mean our children’s health records, behavioral history and grades could “possibly” be LESS secure than they are now?

Does Eddie know how bad our state government already is when it comes to securing our data?

I remember when hackers swiped millions of our Social Security numbers from the state Department of Revenue in 2013...

Here’s the bottom line: if one of my employees started off a conversation that way about his performance, I’d probably suspend, or fire them.

If your boss made a demand, and you replied with a disrespectful, condescending “auto-email”...

...how much longer would you be employed there?

When we launched FAN of SC nearly three years ago, we had a simple goal: empower South Carolinians to create a “chilling effect” in the Statehouse.

We want to change the politicians’ behavior in Columbia.

In order to do that, we have to restore the employer/employee relationship with our state politicians.

We are the bosses.

We are in charge.

We are their employers.

They are our employees.

For too long we have put up with this disrespectful behavior.

For way too long, we’ve allowed them to get away with it.

It’s a big reason why many of them run for office in the first place...

...they believe they are above us.

It’s a big reason why we have rampant corruption.

It’s a big reason why our roads are still crumbling and our school system is the worst in America.

We’ve got to rein in this attitude and disrespect.

But we can’t do it alone.

If you don’t belong to a grassroots group, join one.

If you don’t know where one meets in your area, contact me immediately.

We work with conservative grassroots groups all over the state.  We’d be happy to connect you with their leaders.

If you don’t have one in your county, but want to start one, contact me immediately.

There is strength in numbers.

We need conservatives to start gathering on a regular basis so that we grow our army on the ground in the politicians’ back yard.

Emails and phone calls to your politicians are a good first step...

...but, ultimately, organized South Carolinians in their backyards is what works best.

2. Help FAN of SC empower other South Carolinians to stand up to their politicians.

Help us empower your neighbors to hold their politicians accountable for their disrespectful behavior!

Unlike Eddie “More-Expensive-By-The-Gallon” Tallon, Rita Allison and Garry Smith, FAN of SC doesn’t get funding from the government...

We rely on you to fund what we do.

I hate asking for money, but could you spare a few dollars to help us fight these corrupt politicians in the Statehouse?

FAN of SC is identifying conservative recruits every day.  We buy Facebook ads and send out text messages to our fellow activists.  But that costs money.

We depend on folks like you - folks who want to create a “chilling effect” on corrupt behavior in the Statehouse – to fund our work.

Call me immediately if you’re interested in getting plugged into a local, conservative grassroots organization in your county.

PS – Thanks for even considering a donation to FAN of SC.